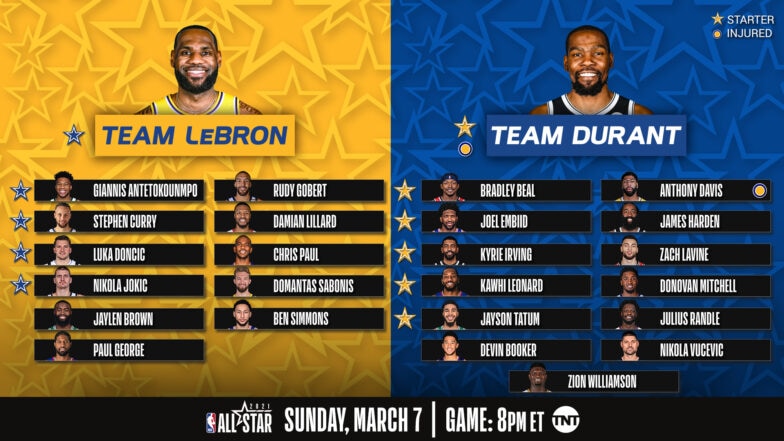 NEW YORK — Captains LeBron James of the Los Angeles Lakers and Kevin Durant of the Brooklyn Nets have selected the team rosters for the 2021 NBA All-Star Game, which will be played on Sunday, March 7 at State Farm Arena in Atlanta. The rosters for Team LeBron and Team Durant were revealed tonight in TNT’s presentation of the NBA All-Star Draft.

Nets guard Kyrie Irving was drafted by Durant with the second overall pick in the NBA All-Star Draft. In addition to Irving, Durant selected 76ers center Joel Embiid, Clippers forward Kawhi Leonard, Washington Wizards guard Bradley Beal and Celtics forward Jayson Tatum as starters. Tatum, voted to the NBA All-Star Game as a reserve, was drafted with the starters as a replacement for Durant, who is unable to play in the game.

In the NBA All-Star Draft, James and Durant drafted the team rosters from the pool of players voted as starters and reserves in each conference. The two captains selected the starters in the first round and the reserves in the second round, making their picks without regard to a player’s conference affiliation or position.

As part of the NBA All-Star Game format, the two teams will compete to win each quarter for their respective beneficiaries. Team LeBron will play for the Thurgood Marshall College Fund and Team Durant will play for UNCF (United Negro College Fund), with both organizations providing scholarship funding to further the higher education of students from Historically Black Colleges and Universities.

NBA Commissioner Adam Silver will select the replacement for any player unable to participate in the All-Star Game, naming a player from the same conference as the player who is being replaced. The player who is named as a replacement would join the team that drafted the replaced player. If a replaced player is a starter, the head coach of that team would name a new starter from his team’s group of reserves. Jazz head coach Quin Snyder will lead Team LeBron, and 76ers head coach Doc Rivers will guide Team Durant.

Durant and James made their picks without regard to a player’s conference affiliation or position.  Each captain drafted 11 players to complete a 12-player roster.  The NBA All-Star Draft rules include: