Reds open camp with remade roster, hopes of moving up 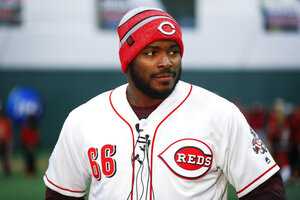 CINCINNATI (AP) — Sonny Gray had a few hours to make a career-changing decision. The Yankees no longer needed him. The Reds wanted another starter, and they were willing to deal for him so long as he agreed to a three-year contract extension.

That’s a big commitment to a team that’s lost 90 games each of the last four seasons. Sure, Gray had a personal connection with Cincinnati — his dad tried out for the Reds’ farm system, and Gray attended his first big-league game at Great American Ball Park. Still, the Reds have languished in last place for four straight years.

What to do? Gray signed on .

“I think it’s obviously notable what the Reds have been doing,” said Gray, who agreed to a deal adding $30.5 million from 2020-22. “I’ve got a really good feeling that we’re trying to turn the corner here and we’re trying to start winning a lot of baseball games.”

After four years of shedding veterans and tossing rookies onto the field to see what they’ve got, the Reds decided it was time to start moving up again. They rebuilt the rotation through three trades, adding Gray, left-hander Alex Wood and Tanner Roark while getting rid of Homer Bailey.

They also overhauled the lineup by acquiring outfielders Yasiel Puig and Matt Kemp from the Dodgers.

The remake wasn’t confined to the field. They hired David Bell as a first-year manager to oversee the metamorphosis from rebuilding to contending — or, at least, being competitive in the short-term. Significant attendance drops during the rebuild prompted the moves that made the Reds an intriguing team as spring training opens.

Instead of wondering how low they’ll go, it’s now more a question of how much ground they can make up in one year in the formidable NL Central.

“I think we’ve got a good chance to win now,” Gray said.

Some things to watch as the Reds fit the new pieces together in Goodyear, Arizona:

NEW LOOK: The rotation got a total makeover, with the three newcomers joining Anthony DeSclafani and Luis Castillo. Bell has to decide how to arrange his new staff. Also, the arrival of Puig and Kemp give the outfield a new dynamic with center fielder Billy Hamilton gone.

ROOKIES TO WATCH: Unlike the last few years when rookies came and went, there should be much more focus on veterans. Nick Senzel could have the biggest impact of the youngsters. He’s a career infielder, but the Reds haven’t ruled out giving him a chance to win the open job in center field.

THEY’RE SET: The infield returns Joey Votto, Scooter Gennett, Jose Peraza and Eugenio Suarez. The back of the bullpen is set, too, with David Hernandez and Jared Hughes setting up closer Raisel Iglesias.

THEY’RE NOT: Center field is their biggest question. They could move Scott Schebler or Puig to the spot, or let Senzel try to grow into the role.

ON DECK: Puig and Kemp are free agents after the season, along with Roark, so if it doesn’t work out, there could be trades in July and the Reds could be back to starting over in some ways. At least the fans will have something different to watch when the Reds open their spring schedule against the Indians on Feb. 23 and the regular season at home against the Pirates — a division rival they’re looking to overtake — on March 28.