Is Deni Avdija the next great international lottery pick? Guards Anthony Edwards and LaMelo Ball are the names in the mix to be picked No. 1 overall in the 2020 NBA draft, but the 19-year-old Maccabi Tel-Aviv wing could end up as a surprise talent. Just how good is Avdija, and which other wings have NBA teams most interested?

As we approach draft night (Nov. 18 on ESPN), our experts Jonathan Givony, Mike Schmitz and Kevin Pelton rank their top five wings, break down the differences in their picks and select one key second-rounder to watch.

Whom do you have as the No. 1 wing in this class?

Besides Tyrese Haliburton, Avdija is probably the easiest player to fit onto a roster that already has strong pieces because of his positional size, versatility, feel for the game and experience. Although he’s power-forward-sized — a hair under 6-foot-10 with a 226-pound frame — he has the skill set of a guard with his ballhandling, passing and capable 3-point shooting

His physical growth over the past year benefited him on the defensive end. He’s strong enough to guard bigger players, with terrific instincts as a rim-protector and rebounder, and he brings a lot of experience defending on the perimeter. His toughness and competitiveness bode well for his transition to the NBA game, as do his aggressive approach and self-confidence.

Avdija can become the best player in this draft if he lands in the right situation. If he were a mismatch 4 for a top college program, Avdija would be in the mix for the No. 1 pick.

He played for one of the EuroLeague’s best teams in a pressure-packed environment. Avdija proved against powerhouses such as Real Madrid, Barcelona, Fenerbahce and Efes that he can function as an off-ball combo forward in games in which every possession matters. Avdija adds value as a defender, cutter, ball-mover, spot-up shooter, post-up creator and occasional transition playmaker.

With the Israeli junior national team and as the youngest MVP in Israeli League history, Avdija worked opponents in transition, made shots off the dribble and created scoring opportunities for teammates. Although the Israeli League isn’t the stoutest competition, he averaged 18.8 points, 9.1 rebounds, 3.9 assists, 1.3 steals and 1.4 blocks per 40 minutes. At the 2019 under-20 Euros, he essentially played center on defense and point guard on offense, helping lead Israel to a gold medal.

Avdija needs to greatly improve his left hand, add nuance as a finisher and become more consistent from 3, but he checks virtually every other box.

Avdija will likely fall into the group that has yielded the most success in the draft: players ranked in the top 10 of my stats-only projections who are taken in the top 10. The past two years, there have been six such players: Luka Doncic, Jaren Jackson Jr., Trae Young and Mikal Bridges in 2018 and Zion Williamson and Ja Morant in 2019.

Monday through Friday, host Pablo Torre brings you an inside look at the most interesting stories at ESPN, as told by the top reporters and insiders on the planet. Listen

This year, there are three players in the top 10 of both my stats-only projections and the ESPN draft rankings: Avdija, Ball and Haliburton.

Compared to Ball, Avdija has a much bigger sample of professional play for projection. He averaged 27.6 minutes in 33 games for Maccabi Tel-Aviv last season in the domestic Basketball Super League and 14.3 minutes in 26 games against EuroLeague competition. Even accounting for the difference in level of play between the BSL and EuroLeague, Avdija was much more effective against domestic league opponents. He made an incredible 67% of his 2-point attempts in the BSL, along with 35% of his 3s, compared to 60% and 28% in EuroLeague play.

I’m skeptical that Avdija will be an accurate 3-point shooter right away, based on his below-average shooting from the free throw line (59% against both competitions), which could make it difficult for him to contribute immediately. Still, given that he won’t turn 20 until shortly after New Year’s Day, he has plenty of time to develop as a shooter.

Who are your other top-five wings?

Okoro has one of the highest floors in the draft because at the very least, he projects as a premier NBA defender from day one. At Auburn, he would bottle up a speedster, chase around sharpshooters and wall up 4s in the post. As long as he can evolve into a respectable spot-up shooter, he’s an easy NBA starter. Even if his 3-pointer takes longer to develop, his handle and passing feel give him other outlets to add value in the half court like Andre Iguodala and Jimmy Butler did early in their careers.

After Okoro, there’s a bit of a drop-off. I’m intrigued by Williams’ long-term potential and two-way versatility at 6-foot-8, 225 pounds, with a 7-foot wingspan. He isn’t the best lateral athlete, but coaches can throw him at LeBron James or Kawhi Leonard in a pinch because of his physical gifts. He’s also a playmaker off the ball defensively, thanks to his range. He isn’t yet a polished offensive player, but his footwork as a ball handler and his comfort rising up for midrange jumpers provide some upside.

The last two spots came down to Devin Vassell, Aaron Nesmith, Saddiq Bey and Jaden McDaniels. Vassell is really interesting in a Mikal Bridges-type role. I think he has a little more shot-creation potential than Bridges, and his defense is disruptive. I wonder how good of a standstill shooter he will be from the NBA 3-point line, given that long release, but he should develop into a valuable contributor who impacts winning.

Although I’m a sucker for rangy wings who can handle and shoot (see past Brandon Ingram takes), in three-to-four years with the right organizational support, McDaniels could end up as one of the best 10 players to come out of this draft.

I’m as high on Okoro as almost any player in this draft, ranking him in my top five overall. Sure, the shooting needs to improve, but guys who can defend four positions, handle, pass and do damage in transition usually find ways to make an impact. Okoro’s work ethic, sound mechanics and confidence also give me hope for his jumper. Even if he ends up being “just” a terrific all-around role player, that still has a ton of value.

I’m not as confident about Williams reaching his full potential, but I understand why a team with a top-10 pick would bet on his combination of physical tools, defensive versatility and youth. To me, that’s when the drop-off starts. I’m not as big of a believer in McDaniels as Schmitz, though I understand the intrigue, and I worry a bit about Vassell’s impact if he isn’t hitting jumpers consistently.

It’s hard to find 6-foot-7 guys with 6-foot-11 wingspans and 215-pound frames who can shoot off movement the way Nesmith does, even if his efficiency might have benefited from a shorter and weaker schedule. He can probably even earn some minutes at power forward, like similarly sized guys such as Andre Iguodala and Dorian Finney-Smith, which makes him a reasonable late lottery pick.

I’m high on Bey for some of the same reasons. I love the fact that he’s big, strong and long enough to guard power forwards but spent quite a bit of time this season defending guards and wings. He shot the ball exceptionally well (45% for 3) with high volume but also did quite a bit of shot creation by bringing the ball up the floor and playing pick-and-roll.

These players project to have valuable 3-and-D roles in the NBA. I have three in my third tier of prospects, with Bey high in the fourth.

Vassell is the cleanest fit in that role. He shot 42% from 3-point range in two seasons at Florida State and was an important part of defenses that ranked in the top 20 nationally. Vassell has good length and is dangerous jumping passing lanes to create steals. Like many, I was concerned by the recent video of Vassell shooting with a different form than he used in college, but whichever team drafts him should be able to quicken his release.

I’m not as high on Okoro, largely because of concerns about his shooting: He hit 29% of his 3-point attempts and 67% of his free throws. As strongly as Okoro defends the ball, he doesn’t generate as many valuable steals as Vassell, and he rates behind Nesmith in this regard. Meanwhile, Nesmith might be the best shooter in this year’s draft. He has the size and versatility to be a threat coming off screens in addition to spacing the floor while spotting up. Defensively, Nesmith has enough size to guard both wing positions.

Bey’s combination of size and shooting ability is compelling. He drops below Vassell and Nesmith in my projections largely because he didn’t generate many rebounds, blocks or steals.

Which projected second-round wing do you find most intriguing?

Recent second-round success stories have tended to be four-year college players who were dinged for perceived lack of upside and late bloomers who weren’t heavily recruited out of high school. Bane fits into that group.

Who is the NBA’s GOAT? 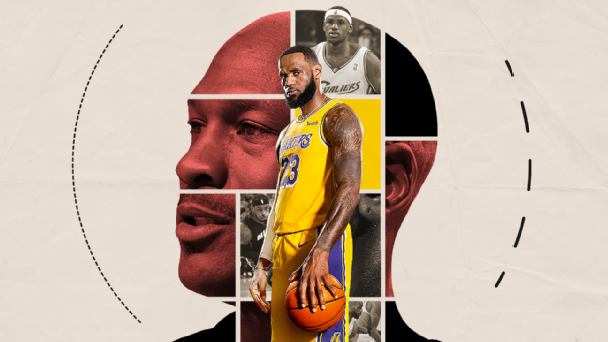 After the Los Angeles Lakers won the NBA championship, the debate has been renewed on who is greater: LeBron James or Michael Jordan?

• Lowe: The GOAT debate is different now
• Are LBJ’s four titles better than MJ’s six?
• How LeBron tops MJ for GOAT status
• Rhoden: It’s time to end the debate
• Jordan vs. LeBron in their own words

Another strong shooter, Bane hit 43% of his 3-point attempts during his TCU career. Largely a role player his first three seasons, when he never finished plays at an above-average rate, Bane capably stepped into a larger role as a senior. That experience should benefit him in the NBA, even if he won’t be asked to create as much of his own offense.

Bane spent much of his time in college defending smaller opponents, and his size served him well in terms of rearview contests, despite a negative wingspan.

Nwora is one of the best on-the-move shooters in the draft. He stands 6-foot-7 with a 6-foot-10 wingspan and scored almost 1,300 points while knocking down 178 3s (39.4%) in three years at Louisville. On top of his college production — averaging 18.0 points and 7.7 rebounds in 33 minutes per game last season — Nwora has been a standout at the FIBA level with the Nigeria senior national team.

Nwora still has questions to answer as a defender, ball handler and passer. But I wonder if the gap between Nesmith (No. 13 in our top 100) and Nwora (No. 45) is that large.

Woodard doesn’t appear to be a consensus top-30 prospect among teams, which is a mistake in my view. His combine measurements (6-foot-7, 230 pounds, 7-foot-2 wingspan) and the physical comparisons we can make from players in our database are eye-opening. The three most physically similar NBA players: OG Anunoby, Kawhi Leonard and Draymond Green.

You can throw Woodard at opposing ball handlers, given his length and lateral quickness. He also possesses the frame to bang with big men, something his college team didn’t take advantage of. Add 43% shooting from 3 last season (but just 62% for his college career from the free throw line), and the outline of a 3-and-D wing is clear. He’ll need to improve his ballhandling, passing and overall scoring ability, but I think if Woodard had played on a team with better spacing and more willing passers, we’d be talking about him in the top 20 right now.

Jonathan Givony is an NBA draft expert and the founder and co-owner of DraftExpress.com, a private scouting and analytics service utilized by NBA, NCAA and international teams.

Mike Schmitz is an NBA draft expert and a contributor to DraftExpress.com, a private scouting and analytics service utilized by NBA, NCAA and international teams.