’ll confess: I hadn’t watched a single Hawks game in its entirety this year until their quadruple OT loss to the Chicago Bulls last Friday night. Sure, they’re not the New York Knicks or Phoenix Suns, record-wise (close, though, at 22-43 this season, 12th in a top-heavy Eastern Conference), but there’s nothing that makes them a desirable League Pass team, not even the exploits of rookie Trae Young (more on him in a moment) and the occasional, “How can he still do that!?” play from 42-year old Vince Carter. Coach Mike Budenholzer is no longer there, but former Spur Dewayne Dedmon is, and Spurs Twitter was hyped on the prospect of the team trading for small forward Taurean Prince at the deadline (which had no basis in any truth, just desire). These are basically the only things I’ve monitored on the Hawks front the entire year before this, the first of two late-season meetings with the Spurs, with part 1 being a road game.

The road has been a nightmare for San Antonio all season. An 11-22 record and a -5.2 differential begin to tell the tale of that nightmare. This Spurs team lost a game to the New York Knicksnear the end of a 1-7 Rodeo Road Trip where they missed the defensive aptitude of 2nd year guard Derrick White on the perimeter immensely for most of it. With 8 of San Antonio’s 17 remaining games coming on the road, they’ll need to beat the lesser teams if they want to pad their record enough to get into the postseason.

That task starts tonight in Atlanta.

Following their 104-103 win against the Nuggets, coach Gregg Popovich said something that really resonated with me when he noted a difference in energy on the defensive end from his crew:

“We call it activity,” Popovich said. “We want more activity from more people. Get involved, don’t be a spectator. Rather than follow people around, we want them to react to our defensive activity.”

For the most part, these same Spurs gave up 120 points to 6 of the 8 teams they faced on the Rodeo Road Trip (including the New York Knicks). Sure, the return of Derrick White has made a huge impact on the team as a tone-setter out on the perimeter, but the Spurs looked as though they had just a bit more pep in their step in that win than they have for most of the year on that end of the floor, with no better example than the stops they got to end that game.

Usually, it’s defense that travels in the NBA because, a lot of the time, the things you need to focus on to be successful on the defensive end are more or less in your control, whereas on offense, sometimes the ball just won’t drop. Activity, awareness, and pride (the backbone of defensive basketball) should be on call for healthy players and the Spurs had it for most of the night.

While the Spurs don’t force the most turnovers per game (they are actually dead last at 12.3), it will be interesting to see if they continue that activity against a Hawks team that has shown to be very generous with the ball to other teams (18.1 turnovers per game, worst in the league).

Trae Young has had an up-and-down rookie season. He’s shooting low percentages across the board (41/33/82), but he’s come on strong since the All Star Break. In the 7 games since then, Young is averaging 29 points on a 47/47/91 slash. He dropped a career high 49 points in that 4OT loss to the Bulls and his abilities were on full display.

Compared to Stephen Curry throughout his college season last year and before the draft, Young had his Steph impersonation going early in the 2nd quarter when he confidently launched a 34-foot 3 with 7 full seconds left on the shot clock:

Showing that he can do more than just shoot the long ball, he hit Kris Dunn with a hesitation at the top of the key before finishing at the rim with the Tony Parker-esque wrong-footed layup:

This sort of penetration has killed the Spurs all season and it’s magnified when happening in transition. With Derrick White back and doing stuff like this though: 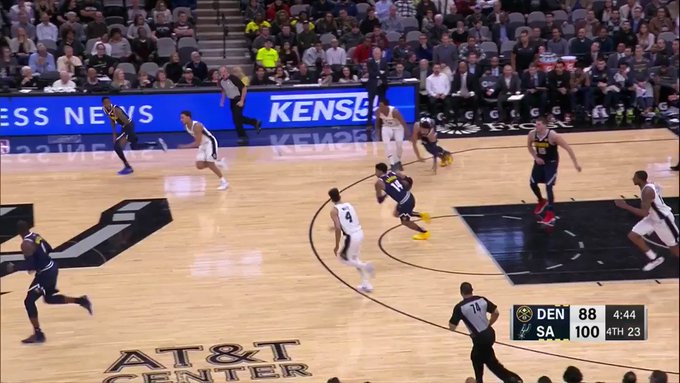 San Antonio should hopefully be able to mitigate the damage done by a young player that may be coming into his own late during his rookie year.

PtR’s Bruno Passos put out some numbers on the most recent Spurs’ starting lineup that features Jakob Poeltl in place of Rudy Gay:

Numbers for the Spurs’ new (but still matchup-dependent) starting lineup of Poeltl, Aldridge, DeRozan, White and Forbes over the past 3 games (27 minutes total):

While this is a very small sample size, it appeared like it was going to be the trend moving forward. Pop has always loved playing two bigs, even as the league has gone away from the more traditional 5-man lineups towards small ball. However, it was announced last night that Jak was questionable for tonight’s game with a sore hamstring.

If he can’t go, Pop has a few options. He could revert to the lineup he deployed for most of the season since White returned from a heel injury in December which features Gay at the 4 spot or he could keep Rudy in his new bench role and insert Davis Bertans into the starting 5. I don’t like this second scenario because I think Bertans benefits immensely from the chaotic pace the 2nd unit seems to play with. I think the 1st lineup is more likely, but who knows? Maybe we could see Drew Eubanks play with the starters after he got some burn in the first quarter the other night against Denver.

Surely stranger things have happened for the Spurs, right?

For the opponent’s perspective, check out Peach Tree Hoops.

PtR’s Gamethread will be up this afternoon for those who want to chat through the game. You can also follow along with the action through PtR’s Twitter feed.

MORE FROM POUNDING THE ROCK

14 hours ago
Connect With Us Listen To Us On